For the last 20 months X-MR have been conducting political research on a private basis using a wisdom-of-crowds methodology.

Tomorrow the UK votes on continued membership of the European Union. We are at the end of a bitterly fought campaign, with conventional polls oscillating from Remain to Leave and back again, but leaving us now with an outcome "too close to call".

This is not the opinion of the people of the UK. Since the day after the General Election last year we have held fortnightly (more recently, weekly) surveys where we ask 500 UK adults what they think the referendum outcome will be. The result has wavered around 60%:40% in favour of remain, with some small excursions towards leave in the last few weeks. But our final survey on 20-22 June returns to the status quo ante, with 61% of people expecting a Remain outcome.

Note that our studies do not purport to estimate share of vote, only to rank the outcomes in order of likelihood. Further inferences from our results to e.g. winning odds or share-of-vote require some modelling process.

"In the referendum on Thursday 23rd June, which answer do you think most voters in the UK will choose (whatever your own preference)?" 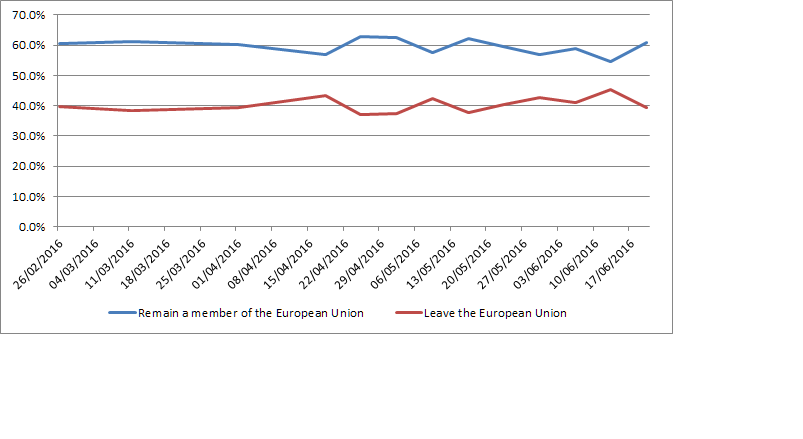