Along with the Prime Minister surveys, we conducted four surveys in the last week of the campaign to try to get a handle on vote share. The election had been characterised as a "Brexit election" so we decided to investigate the influence of Leave/Remain behaviour in 2016 on likely behaviour in the 2017 General Election.

As usual, we asked respondents their opinion about other people's behaviour rather than their own. We made similar investigations in 2015 which proved quite insightful (What we got right, and what we got wrong).

These surveys asked respondents, in England and Scotland separately, which party respondents felt either Leave, or Remain voters in June 2016 would most likely choose in the June 2017 election. For instance:

"How do you think people in Scotland who voted "Remain" in the EU referendum are most likely to vote in the General Election on June 8th (whatever your own choices may be)?"

We did not deploy a sample large enough for useful reporting of the Green Party or others. The results were: 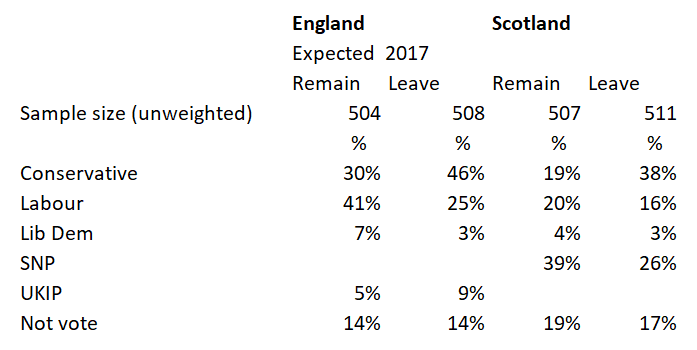 We can see, that although Brexit may not have been an explicitly dominant issue during the Election campaign, it is expected to have a profound effect on people's voting behaviour, very differently in Scotland from England. (We did not undertake this survey in Wales or Northern Ireland).

Suppose we adjust these numbers to share of vote - making the questionable assumption that non-voters in the referendum participating today distribute in the same way: 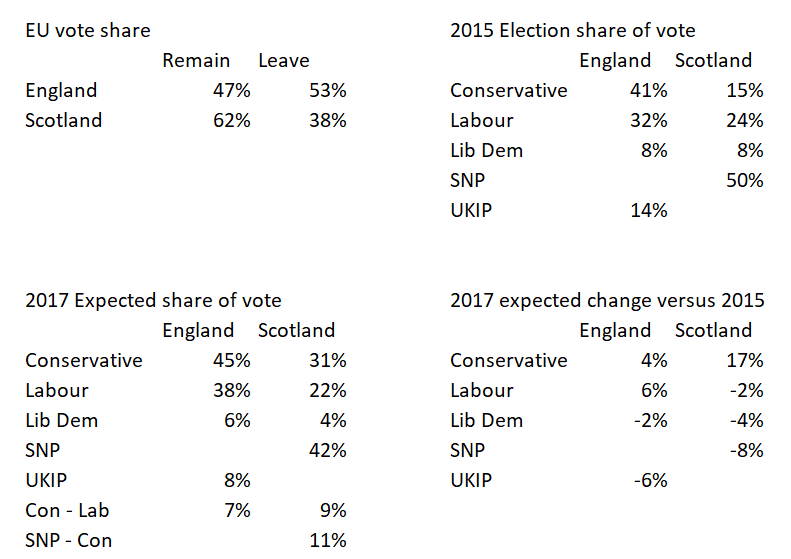 These numbers are in line with the conventional polls taken in the closing days of the campaign. Given the wide regional variation of Leave/Remain and its apparently strong influence on behaviour, making a prognosis for seat distribution is complex. Some things stand out though:

One lesson from 2015 is that our respondents consistently over-estimated the performance of UKIP. This is less likely to be a factor in 2017 with the UKIP profile so diminished.

Fieldwork by Google Surveys, unweighted, based on approximately 500 UK Internet-using adults per week.